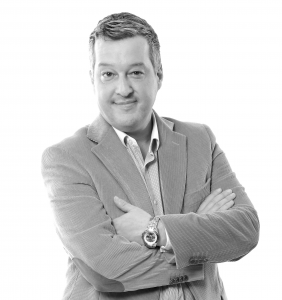 Earlier this month (April 2017), I had the pleasure of working with Johnston Media at the Venue and PA Expo in Edinburgh.

It came about after taking a call from Iain Johnston the Director of Operations of this illustrious Scottish media business who started the conversation with ‘How would you like your face to be seen across the globe?’

Now, I’m a bloke who has spent the best part of his career in a sound-proof radio studio with a microphone and a couple of record players (how old am I?) and, yes, having the perfect face for radio (if I had a pound for every time…) I jumped at the chance!

After a few more prudent questions, Iain explained that as live streaming is now the way forward for all successful events, I would be interviewing ‘a few’ experts from a ‘couple’ of businesses who lead the way in Scottish event management.

No worries, a couple of interviews will not a problem. Lots of time for coffee and croissants in-between broadcasts, re-apply the old face foundation and be a general media luvvie with the crew and guests.

However as the Expo at the Edinburgh International Conference Centre loomed ever closer, I was fielding calls from Iain on a nightly basis (no such thing as 9 to 5 in our business) adding more and more guests to the live streaming schedule. In the end, 14, YES, 14 interviews in a 7-hour period. Move over Huw Edwards!

First, as a presenter, I loved it (despite the dubious choice of shirt that day). The Johnston Media studio was second to none and the whole team were great to work with.

Second, the reason why the guest-list kept growing was that everyone wanted a piece of the on-line action and I understand completely. All the interviewees were extremely knowledgeable, entertaining and informative, genuinely adding an extra dimension to the Expo.

Surprisingly, there was a distinct lack of a ‘hard-sell’ from the interviewees too.

A question I repeated was ‘Surely if we stream from an event, does this effect footfall?’

Absolutely not. In fact it actually increases footfall the following year.

Every event organiser and supplier I interviewed were all in agreement that live streaming from events promotes interaction, allows people to attend regardless of where they are in the world, educates and adds a touch of showbiz to any topic.

So conference, exhibition and event organisers everywhere….take it from a traditional broadcasting Luddite that you should not only consider live streaming, you should just do it!

Johnston Media and their partners are the people to speak to and don’t forget your presenter.

I promise to wear a plain white shirt next time and I’m (slightly) cheaper than Huw Edwards.

Virtual or Hydrid Events in Edinburgh

Video
Comments are off for this post.
If you are looking to hold a Virtual or Hydrid Event in Edinburgh, then we have the perfect space....

Video
Comments are off for this post.
Remake Scotland We recently worked alongside staff and volunteers at Remake Scotland to create a promotional video for them...

Video
Comments are off for this post.
Filming IBM Internet of things in Munich. We were asked by our client to film a two-day conference in...

Video
Comments are off for this post.
It’s official! The Civil Aviation Authority has issued me with – Permission for Commercial Operations (PfCO). This allows me...
This site uses cookies: Find out more.